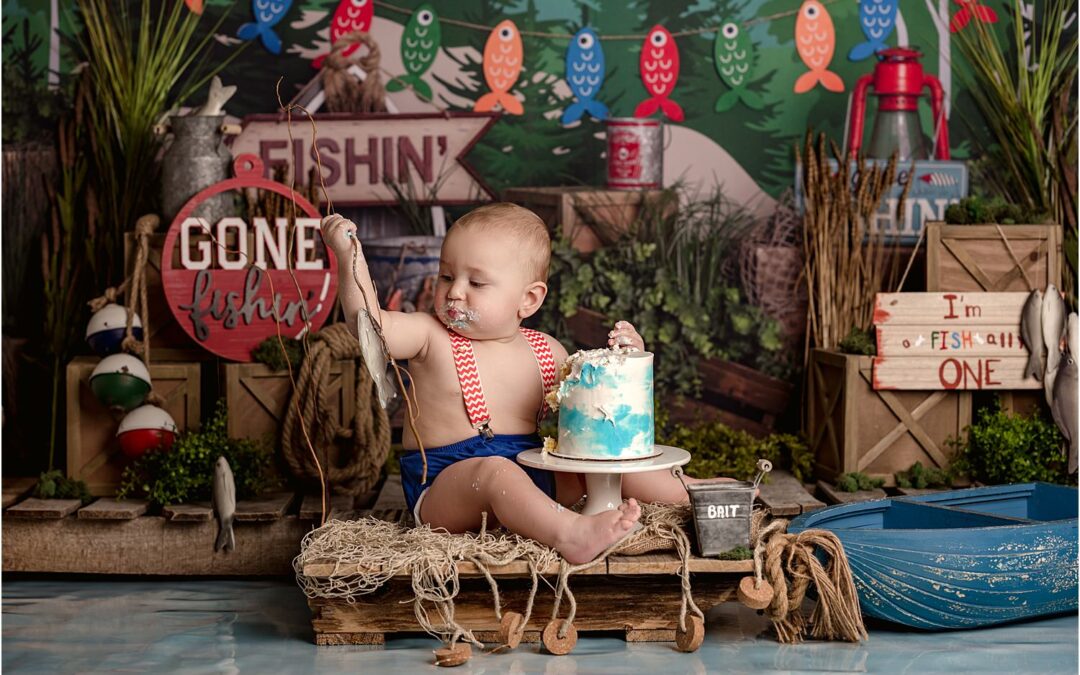 This o-fish-ally one cake smash setup might honestly be one of my favorites. I built it off a backdrop that I had used before. But this time to spice it up I wanted to make a dock. Of course, I could have done this months ago, but that’s just not who I am. So I waited until the weekend before. And then panicked because it was also the weekend we picked our daughters up from camp. That meant a weekend full of laundry. And we were elbow deep in redoing one of their bedrooms, so painting, drywall, new flooring. My life is a mess some days.

But, we decided to use some pallets that we had weathering on the side of our house for the aged look. That made it easier than trying to weather our own in a short amount of time. My husband cut them down to size for me. Which was done completely off memory of me trying to use my arms to explain about how long I thought the backdrop was. It’s a good thing he loves me and my level of crazy.

Once we had those pieces done, I pulled some decor out of storage, signs, bobbers, and Amazon Prime’d some adorable fake fish. I glued the fish to fishing line to hang from sticks we collected at the park. And then I painted a sign that said o-fish-ally one to seal the deal. A quick run to the store for a fishing net and a little pale I could make a bait container, and we’re off.

Wyatt wasn’t as into the cake as I hoped, but he was very excited about his puffs Mom brought. So she put those into the cake to get him to face dive into it. Thank goodness for snacks saving the day!

Enjoy the most amazing gallery from Wyatt’s o-fish-ally one cake smash session!