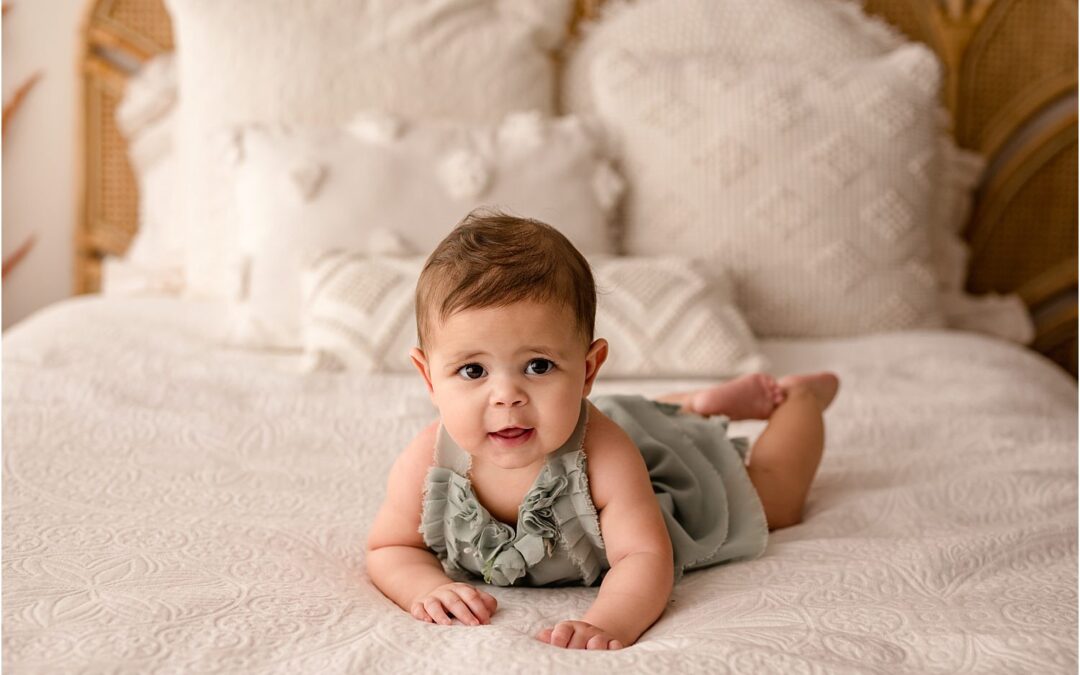 Kenzie and her eyebrows came to visit the studio for her Fraser sitter session. Oh my gosh this young lady had some expressions! I remember when my son was younger his eyebrows were amazing and so expressive. They were weirdly long and bent in like 2 or 3 places when he was thinking hard. It always cracked me up, and Kenzie’s eyebrows reminded me of those days.

She did give a few adorable smiles, but she was mostly just so curious about what was going on. Kenzie has the most beautiful big brown eyes. They really caught my attention as she was staring into my camera. I’m sure she was trying to figure out what it was.

She was a fantastic sitter! Her core was strong and held her up no problem. As a matter of fact she protested being stuck in a basket when I tried. And she also fussed when I tried to get her to do some tummy poses, she just wanted to be upright! That was really the only times she actually fussed during her session.

Kenzie has a sister and brother at home, so I’m sure she is anxious to keep up with those two. She has a little ways to go still before she’s full out mobile, but I bet it’s not very long. Those three will have so much fun, mom will be moving non stop after her shortly!

Her mom chose to use a couple of outfits from my client closet. She picked two different looks, one was a soft sage green, which looked awesome on her, and the other was a black and gold/yellow bold look. I can’t decide if I have a favorite!

You will have to let me know which outfit is your favorite from Kenzie’s Fraser sitter session! Enjoy her gallery.