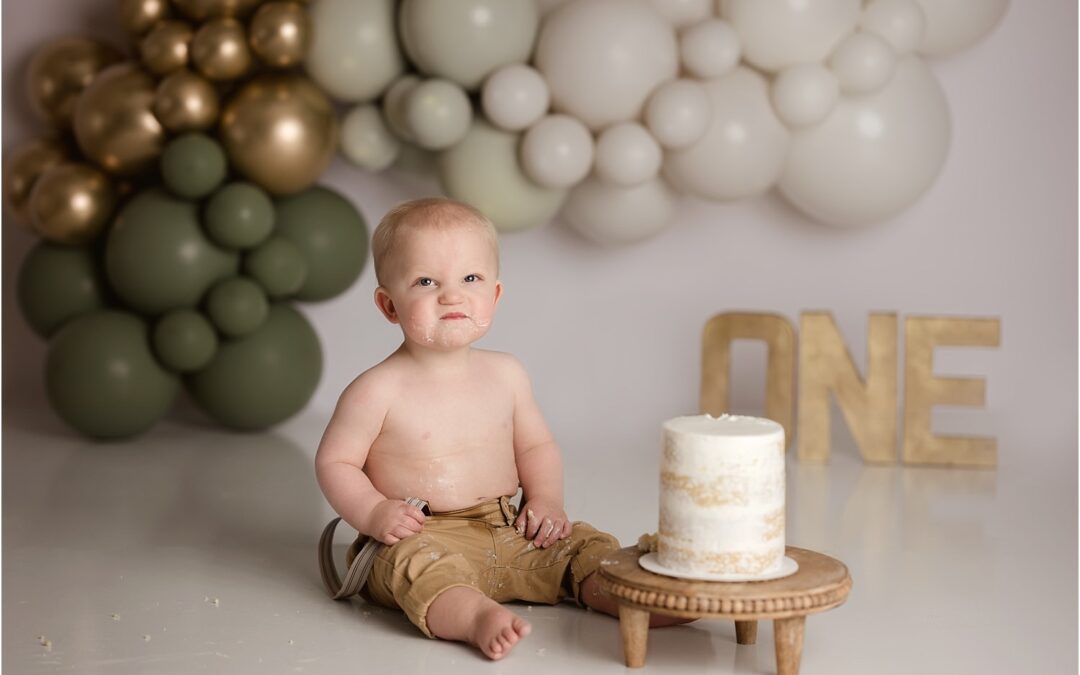 Let me tell you about this adorable little guy that came in for an earthy greens and gold cake smash. First of all, he’s cute as a button. Second, he was not impressed with me. Well, it felt like that anyways.

Kayden really made me work for the rare smile he let loose. He didn’t immediately get super smiley. But he did make the cutest expressions. My favorite image is a toss up between his scrunchy nose as he deep breathed, and the angry popeye stare he gave me at the very end of the day.

We had an easier time at the start, since mom and dad were near by, that helped bring his smiles out. They were still something we had to try hard to get, but he gave them up a little easier.

Once we moved into the cake smash things veered off path a bit. He really wanted mom and dad nearby him pretty much at all times. Even thought they practiced with a cupcake, and he did eat it. He wasn’t all that excited about the cake. He did try it, and he was willing to eat some baby puffs off of it. But for the most part he didn’t get super into his cake. Which is pretty normal. So many kids, and even some really good eaters, don’t get into their cake. I was grateful he was still interacting, and any tears that were shed were quick and he was happy again. Both emotions were brief, but we got through it.

I really hoped he’d like his post cake splash. I have this cute little tub, I thought maybe he’d like to splash in there. But ultimately he was just in the mood to be crabby. I tried my bubble blower, which just upset him more. Dad finally busted out the cell phone so he could stare at his own cute face in the selfie camera and he let all the smiles and giggles out.

I think Kayden’s mom left feeling a little disappointed at how limited his smiles were, but truly in the end they were blown away at how great his final images were. I can’t wait to assemble their album and deliver a truly beautiful product.

Enjoy the final images from his earthy greens and gold cake smash session. I’m hoping to add a video of his album as well! I just love these albums, they are a popular choice among my clients. Albums are a fun way to treasure these fleeting memories and be able to display them for guests.