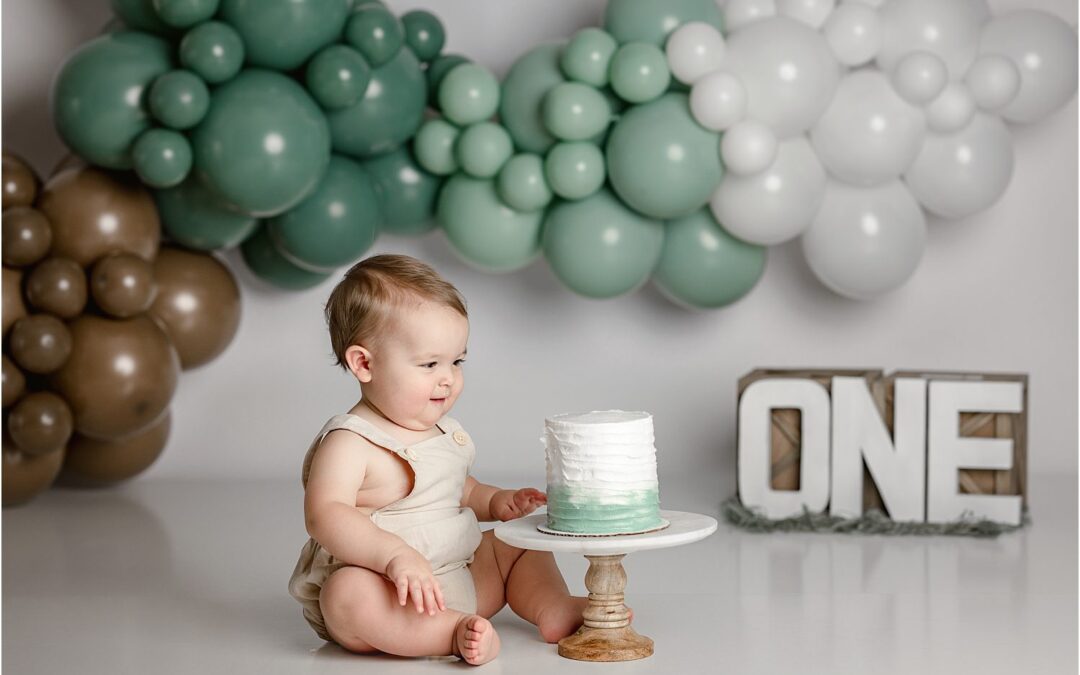 The cutest little set of cheeks came in for his Brownstown cake smash session today. I immediately adored Luke. He, like every one year old was a bit apprehensive. But he warmed up quick and was just the cutest little nugget ever.

Then he sat on the bed and did what I can best describe as an old man who forgot his dentures face. If I didn’t think he was cute before, I did now. His parents said it’s his new favorite face to make. Luke would suck his lips in and he looked just like a guy that lost his dentures. I guess that’s what happens when you have no teeth.

For his Brownstown cake smash his mom with one of my new favorite combinations. This brown, greens and white combo is just so pretty. It’s so simple and neutral with a smidge pop of color.

We did some family photos to start with, and then some of just Luke. He’s standing on furniture but not quite walking yet, thankfully. I love when they aren’t quite confident enough yet to take those steps. It helps to keep them in one spot just long enough to grab a few photos. And it makes the cake so much easier when they won’t get up and slip and slide off my sets!

He dove right into his cake. Luke had a very unique take on it. I’ve never had a kid eat only the bottom of his cake. I was teasing him that he’s going to be a great lumberjack. We were waiting for the cake to just topple over. I believe he was pretty sure the green frosting was better than the white frosting.

I’m so excited to share Luke’s Brownstown cake smash with you. Enjoy his little toothless grin!

If you are looking to book your cake smash, I suggest reaching out a few months ahead of time. It gives us a chance to plan and make everything perfect. Your session is done at my studio, typically a week or two before their first birthday.